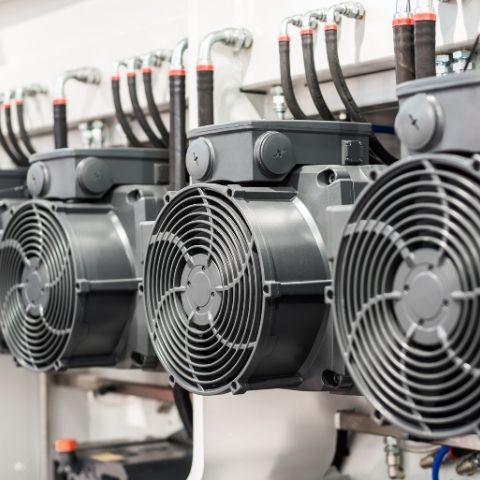 The International Energy Agency (IEA) estimates that motors are responsible for more than 45 percent of the world’s total electricity. Thus, finding ways to maximize their operational efficiency is paramount. Higher efficiency drives can be smaller and moved closer to the motor, which reduces challenges arising from long cables. This will have relevance from an overall cost and ongoing reliability perspective. The advent of wide bandgap (WBG) semiconductor technology is expected to play a major role in enabling new motor efficiency and form factor benchmarks to be achieved.

The use of WBG materials, such as Silicon Carbide (SiC), means that devices can be fabricated and are able to outperform their Silicon (Si) equivalents. Though there are various key opportunities for this technology, industrial motor drives are receiving the greatest interest and attention.

SiC’s elevated electron mobility enables faster switching speeds to be supported. These faster switching speeds mean that, in turn, the associated switching losses will be reduced. Its dielectric breakdown field strength is almost an order of magnitude higher than Si. This allows a thinner drift layer to be implemented, which translates into lower on-resistance figures. Also, as SiC has triple the thermal conductivity of Si, it is much more effective at dissipating heat energy. Consequently, thermal stresses are much easier to mitigate.

Conventional high-voltage motor drives will have a three-phase inverter arrangement, with Si IGBTs accompanied by integrated anti-parallel diodes. The three half-bridge phases drive the corresponding phase coils of the inverter to deliver a sinusoidal current waveform that subsequently runs the motor. The energy wasted in the inverter will come from two main sources - namely conduction losses and switching losses. By replacing the Si-based with SiC-based switches, both of these losses can successfully be combated.

So migrating to SiC Shottkys is clearly advantageous when it comes to improving drive efficiency, as well as extending the system’s working lifespan. But, how about we take things still further? If the IGBTs that are responsible for the actual switch function are supplanted by SiC MOSFETs, then the efficiency enhancements derived will be even more impressive. The switching losses of SiC MOSFETs are as much as a factor of five lower than for Si-based IGBTs operating under the same conditions, while the conduction losses can be as much as halved.

Other interrelated benefits of a WBG approach include significant space savings. The superior thermal conductivity that SiC offers means that the size of the heatsinking needed will be substantially less. With smaller motor drive dimensions, it will be possible for engineers to mount them directly on the motor housing. This will lower the quantity of cabling called for.

ON Semiconductor now offers engineers IGBTs that are co-packaged with SiC diodes. In addition, the company has 650V, 900V and 1200V rated SiC MOSFETs. Through such products, it will be possible to revolutionize motor drives - raising efficiency parameters and making implementations more streamlined. See all of our offerings in our SiC portfolio!

Subscribe to our blog and follow us on social media to receive the latest updates on our technologies, solutions and company news!