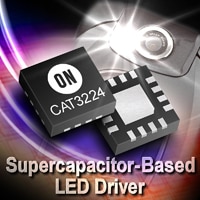 The new ON Semiconductor LED driver works in combination with the latest generation of supercapacitors to help designers effectively eliminate these power management issues. The supercapacitor discharges its power for peak-load functions and recharges continuously, even during the flash peaks. The CAT3224 LED driver controls the supercapacitor charge to create additional energy for the other high-peak current circuits. This supercapacitor LED driver design approach enables true, high-intensity flash and more system functionality, while significantly extending battery life.

The high peak current benefits of supercapacitor technology, combined with the simple parallel logic interface of the CAT3224 also make the device a good choice for industrial applications where LEDs are being used to replace xenon-based lighting.

“The CAT3224 supercapacitor LED driver provides an integrated, easy-to-use, cost-effective solution for high-intensity LED flash capability,” said Scott Brown, vice president of marketing for the Catalyst Group of ON Semiconductor. “We believe this device, along with significant improvements in supercapacitor technology from companies such as CAP-XX Limited and the ever-increasing performance of white LEDs, will combine to make true high brightness LED flash viable for the first time in next-generation, high-megapixel camera phones and standalone cameras.”

The CAT3224 supercapacitor LED driver supports three key functions: precise supercapacitor charging control, management of the current discharge into the LED flash, and constant current for LED torch mode. The CAT3224 sources up to 4 amp LED flash pulses and up to 400 mA torch-mode current, with simple programming via external resistors on the analog control inputs. The device incorporates a dual-mode 1x/2x charge pump, which charges the stacked supercapacitor to a nominal voltage of 5.4 V, while an active balance control circuit ensures that both capacitor cell voltages are matched during the charging cycle. In addition the CAT3224 provides the user with a dedicated logic output to flag the completion of the supercapacitor charging sequence.


The CAT3224 is a key addition to the portfolio of ON Semiconductor products targeted at the four primary subsystems typically found in portable applications. This device specifically addresses the challenging requirements within the Display and Lighting subsystem. ON Semiconductor also offers solutions for the Interconnect, the Power Management and the Audio/Video subsystems for handheld portable devices.

Price and Availability
Pricing for the CAT3224 supercapacitor LED driver is $0.97 USD per unit in 10,000 piece quantities. Samples and evaluation boards are available now. Projected lead-time for production quantities is currently 6 to 8 weeks ARO.