Home >  Blog >  industrial-cloud-power >  Why is my Comparator so Indecisive?

Why is my Comparator so Indecisive?

Comparators seem pretty simple. They compare two signals voltages and set the output high or low accordingly. However, if both input signal voltages are really close, even a little noise on the input signal can cause the output to oscillate between high and low logic levels. Adding hysteresis is the easiest way around this problem.

Hysteresis is when the system output depends on its previous state. When hysteresis is added to a comparator, the upper switching threshold is set higher and the lower switching threshold is set lower. This is basically how an AC thermostat works, in case you haven’t noticed. Let’s take a moment to imagine if thermostats didn’t have hysteresis: the AC might cycle on and off every few seconds at the smallest temperature fluctuations, which would be noisy, inefficient, and put stress on the AC unit.  Adding hysteresis to the AC thermostat allows the system to operate more effectively.

Some comparators have built-in hysteresis, usually around a few millivolts. This may be adequate for certain applications, but other situations may require the addition of external hysteresis. Adding external hysteresis allows the rising and falling thresholds to be specific to the system requirements.

The example below shows the ON Semiconductor TL331 configured as an inverting Schmitt trigger. The TL331 is a single channel, low power, open collector comparator without internal hysteresis. The resistor divider created by the R1 and R2 resistors sets the reference voltage on the non-inverting pin, establishing the threshold voltage at which the comparator output switches. Since this is an open collector comparator, a pull-up resistor is connected to the output. The feedback resistor adds hysteresis through positive feedback. Typically, a relatively large feedback resistor value is used, at least 100 kΩ. 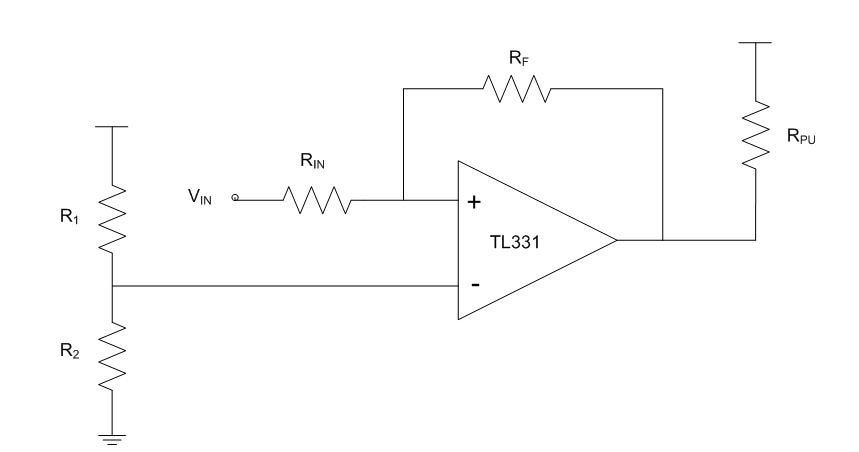 In both circuits shown, adding hysteresis takes only one or two external resistors, and the resistor values can be adjusted to the threshold values best suited for the specific application. When designing in a comparator, if there is any chance that the voltages on the input pins will approach each other for any significant amount of time, adding hysteresis is a simple way of reducing issues caused by noise on the input signal.