Is Your Imaging System Ready for IoT Deployment?

We are about to enter the era of what is being universally referred to as the Internet of Things (IoT). Via this key enabling technology it will be possible to transfer valuable data between all manner of different types of electronic hardware in a way that would have been unimaginable only a few years ago. This could include everyday products from vending machines to domestic appliances, from gym equipment to smart meters. IoT looks destined to revolutionize home automation, industrial control, healthcare and a raft of other applications. The capture and processing of imaging data will have an integral part to play in a large proportion of IoT implementations. If engineers are going to add a fully effective imaging element into their IoT-enabled designs then there are both technical and commercial issues that they must be aware of.

The influence of several market conditions, usage patterns, and adoption of new protocols have paved way for this phenomenon. The rapid adoption of IPv6 (providing a vastly greater number of available IP addresses allowing more devices to be connected to the internet), more ubiquitous wireless access points, and  less power hungry and reliable wireless protocols form the foundation on which IoT networks will be built over the coming years. In relation to wireline data transfer, the protocols favored will mainly be USB and Ethernet. In relation to wireless data transfer, it gets a little more complicated as established protocols like Wi-Fi, Bluetooth LE, ZigBee and Z-Wave will be complemented by emergent ones like ANT+, Thread and 6LoWPan.

Since images sensors are much more compact in construction than they were in the past, they are now far easier to integrate. This is of great importance in IoT imaging implementations, which in many cases are certain to have space constraints to deal with. Unit costs have also been driven down substantially over the last couple of years. Furthermore, the new generation of image sensors now entering the market exhibit enhanced sensitivity levels and better resolutions. As a result there is a marked improvement in image quality being witnessed within any given price bracket.

When implementing an IoT imaging system serious consideration must be given to the quantity of data that will be transferred. This is because it must be assured that, firstly the communication standard employed has enough bandwidth and secondly that the data transfer will not drain the battery too quickly. Bandwidth and power limitation mean it is recommended that whenever possible video data is not acquired in real time. It is of great benefit if the processing and decision making can be executed remotely rather than data having to be passed back to an operative in order for them to analyze it and then subsequently judge the appropriate action – though in some circumstances this will be unavoidable.

Thought must also be given to which cloud platform will be utilized for accessing acquired IoT imaging data. The main options are currently Amazon Web Services, Google Cloud and Microsoft Azure.

Often engineers involved in the integration of an imaging system into IoT hardware have very little relevant experience to draw upon. Imaging system designers who are more knowledgeable may still have to contend with tight deadlines and inadequate resources, thus preventing them from developing an IoT imaging system from scratch. In many cases the sourcing an off-the-shelf solution is likely to be the best approach.

Finding a truly IoT-ready imaging solution can prove difficult as some solutions which claim this actually lack the necessary ease of integration or a high enough degree of technical support from the manufacturer. If IoT imaging is to really take off in the coming year then imaging platforms need to be used that have the right combination of performance, cost and convenience.

To learn more about our solutions for IoT applications, stop by the ON Semiconductor booth this week at the Internet of Things World Event in San Francisco.  Booth #263. 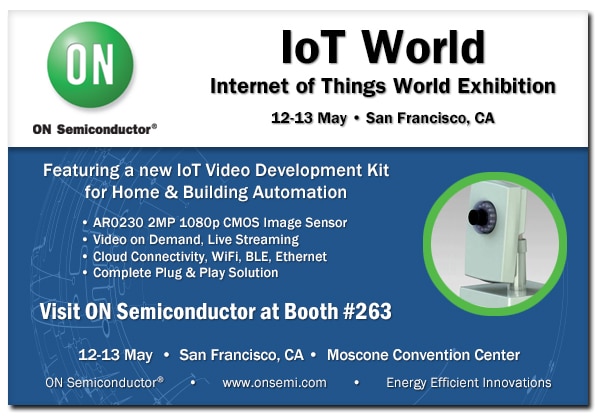