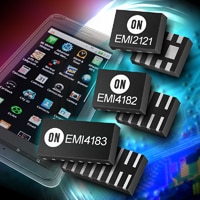 Unlike traditional electromagnetic interference (EMI) filters, the new CMFs from ON Semiconductor are realized in silicon making them better suited to suppress EMI to deeper levels and at higher frequencies than ceramics or ferrite based solutions. Integrating ESD protection with EMI suppression offers space savings of up to 50 percent compared to competitive solutions, translates into significant bill-of-materials (BOM) savings and is a turnkey solution for wireless handset designers.

The EMI2121 single pair CMF, EMI4182 dual pair CMF and EMI4183 triple pair CMF all offer a common mode rejection of 15 decibels (dB) (typical) at 500 megahertz (MHz) and an insertion loss of only 1.0 dB (typical) at 500 MHz. Their high differential mode bandwidth cutoff frequency ensures high levels of signal integrity. The devices feature integrated ESD protection that meets a peak discharge of 15 kilovolts (kV) per the IEC61000-4-2 standard. They support an operating temperature range of −40 ⁰C to +85 ⁰C, and each have a clamping voltage of 32 volts (V), which typically is at least thirty times better than existing ceramic solutions.

“The attachment rate of serial interfaces is multiples faster than handset market growth,” stated Tina Teng, senior analyst at IHS iSuppli. “This is primarily due to the adoption of high speed interfaces such as MIPI for camera and display as well as the feature set additions in HDMI and high end feature phone, smartphone and media tablet markets.”

The new devices are optimized for protecting high speed differential ports using the Mobile Industry Processor Interface (MIPI) DSI, and MIPI CSI2 interface standards, as well as USB 2.0 - the current versions of High-Definition Multimedia Interface (HDMI). The protected CMF family of products supports data speeds of up to 3.4 Gbps, well above what is required for the MIPI, USB 2.0, and HDMI interfaces, while providing high levels of signal integrity.