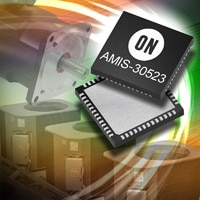 Electronica 2010 – ON Semiconductor Industrial Sector Product Launches
The new AMIS-30523 integrates a stepper motor driver and CAN transceiver in a single package, two-die device. The unique configuration can be used to control multiple motors of the same type on a single bus, and delivers important space savings in designs where PCB real estate is limited or where a single PCB mounted on the back of the motor is employed. Typical applications include general purpose stepper motors in automotive, industrial, medical and marine environments.

The 1 megabit per second (Mb/s) high-speed AMIS-30523 offers seven step modes from full step up to 32 micro-steps. The new device uses a 5-bit current digital-to-analog converter (DAC) to provide a programmable peak current of up to 1.6 amperes (A). Additional features include an on-chip voltage regulator and current translator, an SPI interface, reset-output, and watchdog reset. The AMIS-30523 is housed in a QFP-52 package measuring 8 mm x 8 mm with an overall nominal height of just 0.7 mm and is fully compatible with ISO 11898-2.

Key features include inrush and operational current limitation, an open-drain power good indicator, over-temperature protection, and programmable under voltage lock out (NCP1091 only). The NCP109x series is fabricated in a robust high voltage process and integrates rugged vertical N-channel DMOS making devices from the family suitable for use in the most demanding applications. Operating temperature range is -40 °C to +85 °C. ON Semiconductor offers the new devices in a choice of SOIC and TSSOP eight-pin packages allowing easy drop-in replacement in existing designs.

Industrial Sector Demonstrations at Electronica
The industrial and lighting area of the company’s stand at Electronica will include live interactive motor control demonstrations utilizing ON Semiconductor’s single chip micro-stepping motor drivers that integrate a position controller and built-in control / diagnostic interface. The company’s innovative semiconductor solutions for solid state lighting and the emerging and rapid growth areas of smart grid / E-metering and clean energy will also be on display with technical experts available to discuss applications.