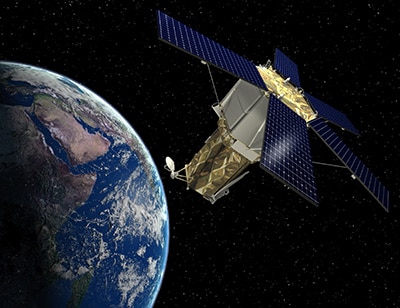 The imaging capabilities of commercial satellites that orbit the Earth can be quite impressive, capable of resolving fine details from an orbit altitude as high as 400 miles.  But even with this imaging power, the real strength of these systems lies in their ability to capture multiple images of the same location over time, providing insight into how the landscape of our planet is changing.  While it may be helpful, for example, to capture a detailed image of a shoreline, it can be even more useful to observe how that shoreline has changed over the past week, or month, or year as a result of erosion or a natural disaster.  This type of analysis has placed commercial satellite imagery in great demand for applications ranging from urban planning and the mapping of national resources to evacuation planning and disaster response.

To help meet this growing need for space-based imagery of the Earth,the latest commercial imaging satellite – WorldView-4 from DigitalGlobe – is scheduled to launch later this week. Once in orbit, WorldView-4 will be capable of mapping 680,000 square kilometers of the Earth’s surface (the equivalent of the land area of the state of Texas) every day, more than doubling the company’s capacity to collect 30 cm imagery.  WorldView-4 will join four other DigitalGlobe satellites – GeoEye-1, WorldView-1, WorldView-2 and WorldView-3 – in DigitalGlobe’s constellation, providing intraday revisit of the high resolution, positionally accurate, time-based imagery so requested by these mapping and planning applications.

The development and launch of complex satellites such as WorldView-4 requires close collaboration among several different companies, with the initial planning for WorldView-4 actually starting almost 10 years ago.  A number of different system components need to seamlessly interact to ensure that the satellite is in the right place, at the right time, and pointed in the right direction; that images are captured correctly; and that the resulting data is transmitted quickly and accurately to a ground station for processing.  And while all of these systems play an important role, the imaging subsystem is clearly vital as it actually captures the images that will be used and analyzed.

To design and build the imaging systems for their satellites – not only the one used in WorldView-4, but those used in the other satellites in their constellation as well – DigitalGlobe contracted with Harris Corporation, which has a rich history of developing advanced imaging solutions for remote sensing.  And when Harris needed custom CCD image sensors to integrate into these systems, they came to us.

We’re pleased to have played a small but critical part in the development of these advanced imaging systems, and look forward to a successful launch of WorldView-4 later this week followed by receipt of the first images from the new satellite.  And as these satellites continue to monitor our ever-changing planet, it’s good to know that the images they capture come about in part because of advanced image sensor technology from ON Semiconductor.