How can an Intelligent Power Module (IPM) be used in an automotive application?

Intelligent Power Modules contain power switches and gate drivers in one module. In addition to the popular three-phase inverter modules, ON Semiconductor offers 2-in-1 PFC modules which combine the PFC driver stage with a three-phase inverter. IPMs using 600 V IGBTs are used in consumer and industrial applications for driving fans, pumps, and compressors. IPMs using 40 V and 80 V MOSFETs are increasingly used in automotive applications to drive electric fans and pumps. 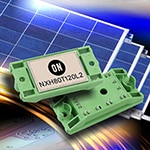 Solar Power EV Charging Wide Band Gap UPS
Your request has been submitted for approval.
Please allow 2-5 business days for a response.
You will receive an email when your request is approved.
Request for this document already exists and is waiting for approval.