“I am pleased to announce that the company reported both record revenues and adjusted EBITDA in the second quarter of 2008,” said Keith Jackson, ON Semiconductor president and CEO. “The integration of both AMIS Holdings, Inc. and the CPU Voltage and Thermal Products Group from Analog Devices are moving ahead positively and continue to position ON Semiconductor as a leader in the analog and power management sector. The definitive agreement to acquire Catalyst Semiconductor, which we announced on July 17, is expected to close in the fourth quarter of 2008. All of our recently closed and announced acquisitions continue to strengthen our relationships and industry position with market making customers. By leveraging ON Semiconductor’s world-class operational capabilities and supply chain, we believe these acquisitions will help enable ON Semiconductor to continue delivering improved value to our shareholders, customers and employees.” 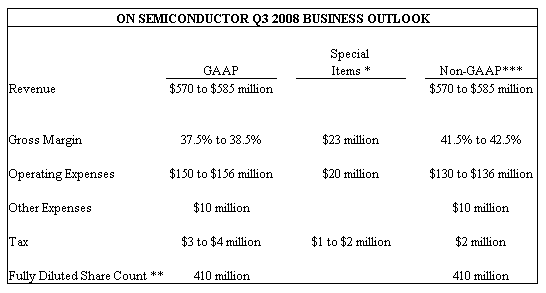 ** Fully Diluted Share Count can vary for among other things, the actual exercise of options or restricted stock, the incremental dilutive shares from all of the company’s convertible senior subordinated notes, and the repurchase or the issuance of stock or the sale of treasury shares. Please refer to the table on our website for potential changes to the Fully Diluted Share Count.

TELECONFERENCE
ON Semiconductor will hold a conference call for the financial community at 8:00 a.m. Eastern time (ET) tomorrow to discuss the second quarter 2008 results and other related material information. The company will provide a real-time audio broadcast of the teleconference on the Investor Relations page of its website at https://www.onsemi.com. The webcast will be available at this site approximately one hour following the live broadcast and will continue to be available for approximately 30 days following the conference call. Investors and interested parties can also access the conference call by dialing (888) 546-9664 (U.S./Canada) or (706) 679-4331 (International) and providing the conference identification number of 56464044. ON Semiconductor will provide a dial-in replay approximately one hour following the live broadcast that will continue through approximately Aug. 13, 2008. The dial-in replay number is (800) 642-1687 (U.S./Canada) or (706) 645-9291 (International) and the conference identification number is 56464044. The script for tomorrow’s call will be provided on our website and furnished via a Form 8-K filing.

This news release includes “forward-looking statements” as that term is defined in Section 27A of the Securities Act of 1933 and Section 21E of the Securities Exchange Act of 1934. All statements other than statements of historical fact are statements that could be deemed forward-looking statements and are often characterized by the use of words such as “believes,” “expects,” “estimates,” “projects,” “may,” “will,” “intends,” “plans,” or “anticipates,” or by discussions of strategy, plans or intentions. In this news release, forward-looking information relates mainly to the second quarter of 2008 and its bookings trends, backlog levels, estimated turns levels, anticipated revenues, gross margins and average selling prices, stock based compensation expense and similar matters. These forward-looking statements also include statements related to the benefits of the proposed transaction between ON Semiconductor Corporation (“ON”) and Catalyst Semiconductor, Inc. (“Catalyst Semiconductor”) and the future financial performance of ON. All forward-looking statements in this news release are based on management's current expectations and estimates, and involve risks, uncertainties and other factors that could cause results to differ materially from those expressed in forward-looking statements. Among these factors are revenues and operating performance; changes in overall economic conditions; the cyclical nature of the semiconductor industry; changes in demand for our products; changes in inventories at our customers and distributors; technological and product development risks; availability of raw materials; competitors' actions; pricing and gross margin pressures; loss of key customers; order cancellations or reduced bookings; changes in manufacturing yields; control of costs and expenses; significant litigation; risks associated with acquisitions and dispositions and the integration efforts related thereto; risks associated with our substantial leverage and restrictive covenants in our debt agreements; risks associated with our international operations; the threat or occurrence of international armed conflict and terrorist activities both in the United States and internationally; risks and costs associated with the regulation of corporate governance and disclosure standards (including pursuant to Section 404 of the Sarbanes-Oxley Act of 2002); risks involving environmental or other governmental regulation; difficulties encountered in integrating merged businesses; the risk that ON’s acquisition of Catalyst Semiconductor does not close, including the risk that the requisite stockholder and regulatory approvals may not be obtained; the variable demand and the aggressive pricing environment for semiconductor products; dependence on the ability to successfully manufacture current products in increasing volumes on a cost-effective basis and with acceptable quality; and the adverse impact of competitive product announcements. Information concerning additional factors that could cause results to differ materially from those projected in the forward-looking statements is contained in ON’s Annual Report on Form 10-K as filed with the Securities and Exchange Commission (the “SEC”) on February 12, 2008, Quarterly Reports on Form 10-Q, Current Reports on Form 8-K and other of ON’s SEC filings, and Catalyst Semiconductor’s Annual Report on Form 10-K as filed with the SEC on July 3, 2008, Quarterly Reports on Form 10-Q, Current Reports on Form 8-K and other of Catalyst Semiconductor SEC filings. Readers are cautioned not to place undue reliance on forward-looking statements. We assume no obligation to update such information.